Hi, all! Haven’t had much to report since our big FFF premiere, 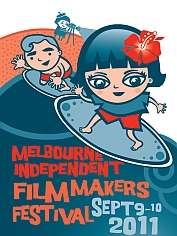 but I’m here with the great news that, beginning Saturday, our fans will have three opportunities to see our film at two different film festivals in the span of one week.

Then, on Friday, September 9, at 7pm, we’ll be the opening night film at the Melbourne Independent Filmmakers Festival, located at the Premiere Theaters, 101800 W Hibiscus Blvd., Melbourne, FL 32901. John and I will be in attendance for our big homecoming. Hope to see old friends there!

Have a great Labor Day!