This afternoon I’ll be having some of the camera crew over to my house to test out the editorial possibilities of using stop-motion footage for situations that might typically be covered in slow-motion. This is one of the creative solutions we’re trying as we get comfortable with both the opportunities and limitations offered by our chosen camera: the Canon 5D Mark II DSLR. 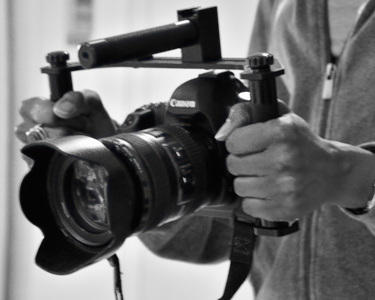 For those who don’t follow this stuff, the Canon 5D Mark II DSLR is a professional digital still photography camera that happens to shoot HD video. I don’t know that the folks at Canon expected this technical feature of the Mark II to be used to make full-length motion pictures, but nevertheless, a gaggle of young independents are scurrying for their project to claim the title of “First Feature Shot on the Canon 5D Mark II DSLR.”

Regardless of who shoots the very first full-length Mark II movie (and some kid in Boise probably already did it in his basement), the fact that A BEAUTIFUL BELLY is being shot on the 5D Mark II is exciting for numerous reasons. We are undeniably at the forefront of what is soon to be the new indie filmmaking wave. We have here the opportunity to pioneer a new medium, which is part of what today’s camera tests are all about.

So why — other than bragging rights — is A BEAUTIFUL BELLY shooting on the Canon 5D Mark II DSLR, anyway?

First, the Mark II is small. It’s a still camera, and even when loaded up with a Fig Rig, it remains unbelievably versatile, maneuverable, and discreet.

Second, the Mark II picks up light like a mother. If we were shooting this feature on a typical HD camera with a 35mm lens adaptor for cine-lenses, we’d lose multiple stops of light, requiring complicated and time-consuming lighting set-ups. Not to mention, with all those lights surrounding the set, your actors and your operator are incumbered in their actions. Remember Christian Bale’s freakout about someone adjusting a light in his eye-line (an understandable freakout when you know how movies are made)? Shooting on the Canon Mark II, the lighting is so minimal, your actors can focus on the moment.

Finally, footage shot on the Canon Mark II is beautiful.

I’m pumped to be making this film on the Mark II. If we’re the first to do it, all the better, but much more important than being first to me is being good.

Please help support A BEAUTIFUL BELLY by contributing through Paypal or sending your tax deductible contribution to the Enzian fund. Visit the support tab for more information.